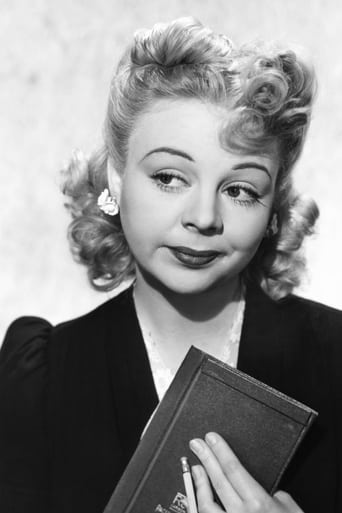 Sugar, Pepper, Pearl, Sunny, Goldie, Bubbles, all those are nicknames borne by petite actress Iris Adrian in several of the 160 movies she made. With such names, don't expect to see her playing Joan of Ark or Electra but it remains that all these pet names reflect her winning femininity, its sweetness, its spiciness, its radiance. What's more their funny overtones are telltale signs of Iris Adrian's own quick witty sense of humor. Sexy yes, but with a sharp tongue. This aspect of her personality helped her to evolve and last, changing from the roles of blonde chorines or waitresses or, on the wilder side, of streetwalkers and other gangsters' molls to colorful bit parts in comedies with Abbott and Costello, Jerry Lewis and Elvis Presley. She ended up playing almost exclusively for Walt Disney productions before retiring at the respectable age of 82. Though she never achieved star status she could easily have if the circumstances had been favorable. For she steals scenes in a lot of movies provided of course her role is fleshed out sufficiently. She was excellent, for instance, in more than one poverty row crime movies. Don't miss her in 'Gold Diggers of 1937', 'Go West' (with the Marx Brothers, 1940), 'Lady of Burlesque' (1943), 'The Paleface'(1948), 'Once a Thief' (1950) and 'The Errand Boy' (with Jerry Lewis, 1961). Date of Death 17 September 1994, Hollywood, California  (aftermath of earthquake)