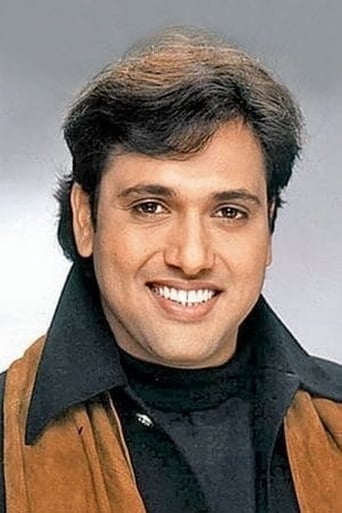 From Wikipedia, the free encyclopedia. Govinda ( born Govind Arun Ahuja, 21 December 1963) is a Filmfare award-winning Indian actor and politician. He has appeared in over 120 Hindi language films. At the start of his career, his acting and dancing skills gained him widespread attention among film viewers. He later gained worldwide fame as a Bollywood icon through comedy films such as Shola Aur Shabnam, Aankhen, Coolie No. 1, Haseena Maan Jaayegi and Partner. He was a member of the Indian National Congress Party. He was elected as the seventh Member of Parliament for the Mumbai North Constituency of Maharashtra, India in the 14th Lok Sabha elections in 2004, after defeating Ram Naik of the Bharatiya Janata Party. In the 2009 General Elections, he opted out of politics to concentrate more on films. However he continues to have political favor from Congress Party. His constituency was succeeded by Sanjay Nirupam (also from Congress). In June 1999, Govinda was voted as the tenth greatest star of stage or screen of the last thousand years by BBC News Online users. Description above from the Wikipedia article Govinda, licensed under CC-BY-SA, full list of contributors on Wikipedia.