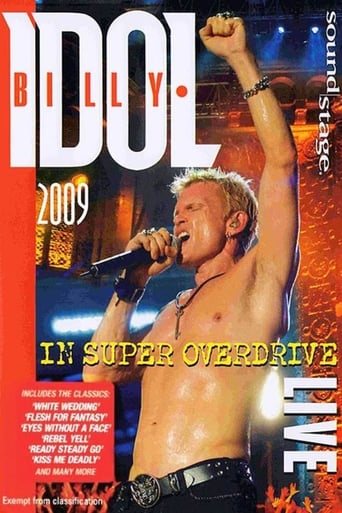 Billy Idol: In Super Overdrive was released on 2009 and directed by the acclaimed director and was released in languages English has a duration of 70 minutes, on a budget of and with an IMDB score of 4.8 and with actors in the cast Billy Idol Steve Stevens . In Super Overdrive Live was filmed at the Congress Theater, Chicago for the US TV series Soundstage and originally broadcast in U.S. in July 2009. The show sees Billy Idol, with trademark sneer and peroxide hair very much to the fore, reunited with guitarist Steve Stevens, who played on (& sometimes co-wrote) all his 1980s hits. The tracklist runs from early Generation X favorites, through his classic solo singles and up to tracks from his most recent album, "The Devil’s Playground". Idol is a fantastic live performer who oozes onstage charisma and the audience rocks along to every minute of this mesmerizing concert. Lineup: Billy Idol (vocals); Steve Stevens (guitars); Brian Tichy (drums); Stephen McGrath (bass); Derek Sherinian (keyboards). Billy Idol delivers a dozen of his most popular tunes during the course of this Chicago concert. The setlist includes favorites such as "Dancing With Myself," "White Wedding," and "Rebel Yell."